skip to main | skip to sidebar

Well, I stayed away from the Pride Parade in St. John's for 6 years in a row now. it's unfortunate that I don't feel welcome or comfortable to attend with so many people in high places in pride who for whatever reason, hate me and try to discredit, and even white-wash, all the trail-blazing i did as a trans pioneer who not only brought the T together with the LGBs.

But history will show that my decision to incorporate Pride into a non-profit entity and open the doors for sponsors, proved to be a great move, and I take great joy and pleasure in seeing the continued growth of St. John's Pride Inc, as it has grown exactly as I had hoped it would, when I created it in 2010, ran a very successful 2011 Pride week with ground-breaking new sponsors, and declared my mission complete when i handed the reigns over to a very capable ops team in 2012 when i resigned.

Finally, I think the best news of all today, though, is that the parade event appeared to go smoothly and there were no interruptions by any of the hate groups that plagued pride events in Toronto and Hamilton last month. so overall, a great day for our city and province!
Posted by Jennifer McCreath at 1:11 AM No comments:

McCreath's reaction to Jenn Smith of BC

So, it was brought to my attention tonight that a trans-identified person by the name of Jenn Smith (who interestingly enough, appears to be a non-op feminine-presenting male, with a female name, but requests masculine pronouns), has been causing a stir out in BC as an apparent visible trans community member who is opposing the inclusion the teaching of trans-accepting values in school.

Anyway, after an hour or two of watching Jenn videos, I noticed three key themes, and ironically, they all seem to be quite oxy-moronic.

1) Jenn keeps referring to trans as a 'lifestyle choice'  well, if this is what you are talking about Jenn, then you've got this community all wrong and you have gotten this educational program all wrong. This is not about lifestyles, this is about accepting people who have a medical condition and treating them with love, respect, and equality, not to mention, ensure access to the medical treatment they need.

2) and Jenn, no, this is not a 'trans agenda' program designed to force or encourage people to transition who are not in need of transition medical services, it is simply a program designed to make people aware that there will be people in life that they will come across, who will indeed identify as someone who needs trans medical services. In fact, having watched many of your interviews, the only 'agenda' i can see Jenn, is yours - specifically, your agenda to discourage trans people from seeking the medical attention that they need, and this is a serious problem. Yes, there are some cases of trans-regret, but most studies I have seen over the past 13 years suggest that trans-regret is less than 1%. So the risk of trans-regret is not a valid reason to shut down trans medical services or trans educational programs.

3) Jenn seems to have a hard time understanding the difference between sex and gender... and perhaps this is where the terms "transgender" or "trans umbrella" have gotten the trans community into this messy set of arguments with the religious and the political right-winged.

I have always liked the term transsexual, as it implies that we are talking about people who desire and/or require medical interventions to their body to change SEX... not just a case of someone doing some sort of gender-bending for various personal non-medical reasons, (ie: cross-dressing, drag performing, or transvestism).

If the various trans community members don't want to have to deal with infighting in their local communities, perhaps it is time to clearly state the difference between transsexuals and the rest of the trans community.. Because it is the transsexuals who take all the discrimination and abuse, but it is the gender-benders who are the core of this onslaught of anti-trans attacks.

Should children in school learn about the fact that trans people exist? Yes, absolutely. Should they be taught to respect them and treat them with dignity and equality? yes..  and Jenn, so far, your arguments against SOGI do not address SOGIs core mandate in the first place.

Finally, Jenn Smith seems to constantly talk about alternate motives of this 'trans movement'.  but Jenn, it seems you are the one with the hidden agenda here, as you seem to be getting financial results from booking all of these 'talk sessions' you have been doing.

So Jenn, say what you feel you must, but take note that the rest of the world can see through your propaganda and bullshit.

Posted by Jennifer McCreath at 5:53 AM No comments:

Yes folks, Jennifer McCreath is still alive and well. In fact, I am going to start using this blog as my main web site from now on, as I have not been able to put the time and effort into keeping JenniferMcCreath.com active.


Meanwhile, I am seriously considering a run in the upcoming Newfoundland and Labrador provincial election. I am currently undertaking feeler studies to gauge the levels of potential public support.  Would love to hear from you if you have an opinion either way!  jennifer.mccreath@yahoo.com or twitter @Jenn_McCreath


Posted by Jennifer McCreath at 3:20 AM No comments:

As this gay/trans/queer/umbrella community refocuses on asking for apologize for 1990s issues, what about the trans people who are still suffering today? Who is looking out for their best interests? Who is going to continue the fight to eliminate the unnecessary and discriminatory CAMH monopoly for access to NL trans health funding? Who is going to fight the chronic underemployment and unemployment that trans people in NL still face today? Are gay or "LGBTQ umbrella" Organizations, such as St. John's Pride, or Pflag NL, the right groups to lead this charge? Or do we need a trans-specific group to step up to the plate and make this work a top priority? #nlpoli 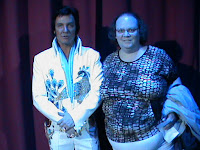 Thane Dunn of Moncton, New Brunswick is best-known as an Elvis Presley tribute artist. He brought his "Rock and Gospel" show to St. John's, Newfoundland last night for the first of a two night stand at Holy Heart Theatre.  Thane was accompanied by his backing band the Cadillac Kings, as well as with Bill Baize, a tenor singer who toured and performed with Elvis Presley from 1971-1976.

Thane has a genuine love and respect for Elvis and his talents. He made it clear that he is not some 'knock off' or 'impersonator' but wants to be accepted as a legit serious musician who plays Elvis cover tunes.  He was recognized in 2009 as the International World Champion at the world's biggest Elvis conversion, and his show certainly did not disappoint. Thane had a near-sold-out crowd captivated during his two hour set with his Elvis wardrobe, his stage presence, his sense of humour, and a strikingly similar voice.

Thane was also proud to announce his support for the local SPCA where he raffled off a guitar and a robe as a fundraiser. Thane was also joined on stage by two local Newfoundland musicians, including a bass player who graciously filled in at the last-minute because Thane's regular bass player was ill and injured. A young lady named Kim also shared the stage as a backing vocalist.

At one point late in the show, Thane brought a young man on stage who couldn't have been any older than 4 or 5 years old, who was dressed up in Elvis garb, complete with jump suit, sun glasses, side burns, and microphone.

just wanted to report that jennifermccreath.com is down for a while, and so is my usual email addresses associated there, so if you are looking to get a hold of me, please email jennifer.mccreath@yahoo.com

Jenn
Posted by Jennifer McCreath at 1:49 PM No comments:

Hello St. John's. Tomorrow is a very important day - Election Day. If you are unhappy with the status quo down at City Hall, tomorrow is the best chance to shake things up, something we all get to do only once every 4 years.

Elect me to City Hall and I guarantee I will fight for transparency and additional citizen engagement in the decision-making process.

I thank you all who have supported me, and I biggest hope of all, is that we set a record for highest voter-turn out. Sincerely yours, Jennifer McCreath #nlpoli #sjpoli